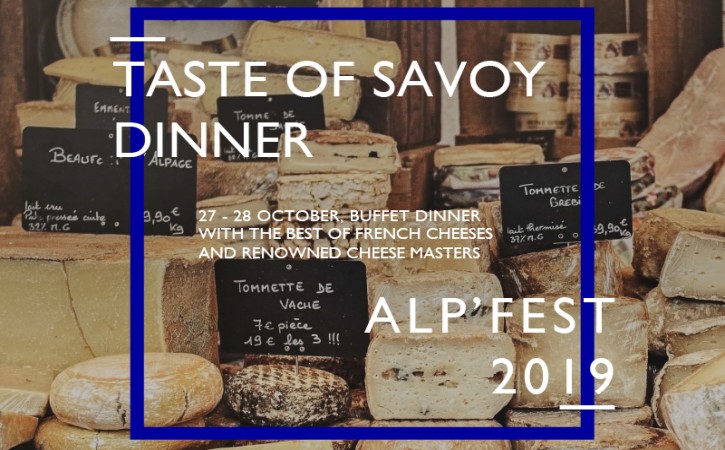 Radisson Blu Hotel has the honor of hosting the very first Alp’Fest in Kuwait. This unique event showcases the world class reputed gastronomy, tourism and traditions of the Savoy region in the French Alps, the region known for its breathtaking views, fresh mountain air and delicious cheese. Kuwait will have the opportunity to discover the beauty of the Savoy region on 27 and 28 October at the Radisson Blu Hotel, Kuwait.

This year, Alp’Fest will introduce guests to the cities of Evian, located along the Leman lake and standing on the foothills of the Alps, and Alpe d’Huez, a renowned ski resort. Get ready for a culinary adventure!

The Executive Chef of Evian Resort, Franck Miglierini, will feature his four course menu during the VIP gourmet lunch at a unique Sky Lounge setting. Chef Franck has experience from several Michelin star restaurants. Today, he proudly spearheads six standalone high-level restaurants in Evian and leads a team of over 60 chefs. The fourcourse lunch with cooking demonstrationincludes signature items of Chef Franck such as marinated rainbow trout, veal loin, declination around chestnut and of course a cheese platter featuring the best cheeses of the Savoy region.

The extensive dinner buffet at Al Bustan Restaurant will feature French cuisine at its best. You can look forward to specialties such as, quiche, duck, seafood and fish, live stations with fondue, raclette, tartiflette and much more. The cherry on the top would be the desserts section including crème brûlée, mille-feuille, macaroons and other authentic delicacies. Throughout the evening, French music band “Tradi’sons” will bring on the ambiance of French folklore.

The selection of cheeses was imported specifically for the event with help of the Cheese Master or “Maître Fromager” in French, Chef Bernard Mure-Ravaud, who will make sure that your culinary experience is truly unforgettable. Chef Bernard started his cheese specialist career at the age of 15 in a small cheese boutique in the French city of Grenoble. 35 years later he is recognized as one of the most famous and passionate cheese specialists, and delivers special cheese selections to a very large number of prestigious institutions across France.

Discover the beauty of French alps and Savoy region in Kuwait on 27 & 28 October! Don’t miss this culinary adventure and book your spot on T: 2567 3000 or sales.kuwait@radissonblu.com.